My love,
The NT scan went awesome! We got to see the Bug on a huge 50" flat screen TV and everything looked wonderful. We could see the most beautiful brain, spine, limbs and heart. The Bug was sleeping on its tummy, nuzzled up to the placenta, so there was no movement, but it's okay. The doctor said the nuchal fold was just the right thickness and my blood work came back with a 1:>10,000 likelihood of the three major trisomies. So, all very good news.

In the last month, I've become more comfortable with the thought that we're going to see this through. We've announced our pregnancy on Facebook and I've started wearing mostly maternity clothes. I swear I've felt the Bug move, but your dad says it's all in my head. Given the fact that I found out I have an anterior placenta, (which means it's at the front of my uterus and in front of the baby) makes me think he might be right. But don't tell him that. :)

Today we're hoping to find out the Bug's sex. I'm 17 weeks, so we scheduled an elective ultrasound at this place in Denver that Aunt Sabrina had a great experience at. Just two and a half more hours. I feel like a kid at Christmas. I'll be back with the results.

On the not-so-great part I have gingivitis. Apparently it's pretty common during pregnancy. After a pretty emotional time at the dentist, scheduling a cleaning for Monday, using Listerine twice a day and convincing myself temporarily that the bacteria was going to hurt the Bug, I'm doing okay. My gums on the right side of my mouth hurt like hell, but I'm hoping it's temporary. As far as pregnancy afflictions go, I think I'm getting off pretty easy.

Well, I'll talk to you soon. Here's a picture of my NT scan. 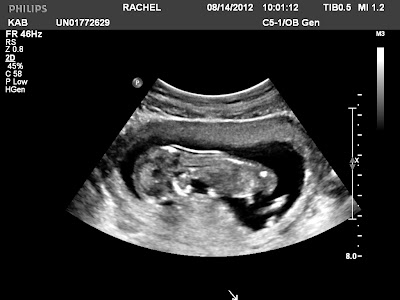