After I got the positive HPT on Tuesday, I called my RE's office and told them. If it's possible, they were just as excited as I was. They sent me in for bloodwork to check my HCG and progesterone levels. The HCG test is commonly referred to as a "beta." So beta #1 panned out this way: HCG - 126, progesterone - 20. Pretty good numbers. :) Then they sent me back two days later for beta #2. These were the results: HCG - 370, progesterone - 25.6. They like to see the HCG double every 48-72 hours, and the progesterone to stay above 8, so the nurse said these results were great! I'm on these wretched progesterone suppositories for who knows how long to keep the level up in my uterus, so first hurdle cleared there.

Now we're on to a whole host of others.

The biggest thing we're battling right now is my anxiety. I'm not really what you'd call an optimist. I'm always waiting for the worst case scenario to happen. Don't worry; I'm in therapy for it and have been for a while. I don't want to fuck you up too badly by not ever letting you drive or shave or something like that. But no matter how much work I do on my anxiety, stressers always pop up to make me go back into overdrive. This is a stresser. Not that I'm not thrilled to finally be pregnant (hallelujah!) I'm just scared shitless that it's not going to last and it's not you in there. Your dad says he knows for certain that this is it and that we're going to meet you come February. I'm getting there.

I go back and forth between daydreaming about getting big and pregnant and holding you in my arms to going to the bathroom and seeing blood in my underwear and ending up in the ER. I have absolutely no reason to believe that this pregnancy will end badly, except for the reason I confessed to two entries ago: it's just not meant to be this easy for me. Is it?

Your poor father, he puts up with me so well. I know I would have gotten frustrated long before now. That's why I want him to be your daddy. He's amazing, just you wait.

So, what to do with this journal now that I'm pregnant? Well, it's going to change a bit, but not much. It's still meant to show you all that I went through to be your mother, and I can't help but think that the real test of endurance has yet to come. So, stick around. The story's not over yet.

I saw two lines this morning.
Shit just got real. Details to come. 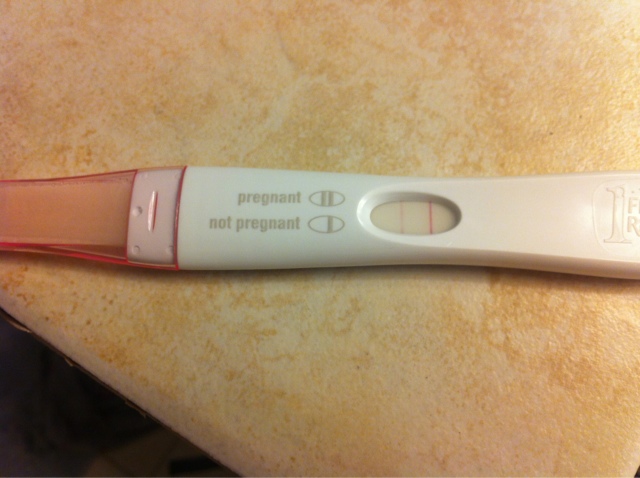 Posted by Rachel at 7:17 PM No comments:

My love,
I know it's been a month since my last entry. This was intentional... mostly. The main reason was that your father and I took a big step in our journey to meet you this month. I'll give you the details here in a minute, but first let me back up. I started my period spontaneously (read: unexpectedly) on Mother's Day. I probably should have been upset, but instead I was pleasantly surprised, especially since it made that cycle only 27 days. That's almost unheard of when you have PCOS. We were already scheduled to see our RE the next day and I was glad that we would have something good to report.

We went into the appointment sure that the doc was going to say our numbers sucked and he would recommend IVF as the next step. We were prepared to politely tell him that if that were the case, we'd rather wait until January of 2013 to allow us to save up some more money. We had made the decision together and it felt good.

Then, he spun us around 180 degrees and said we'd done such good work, he'd like to give IUI (intrauterine insemination) a shot first. I was speechless. We mentioned wanting to wait until the next month, but later changed our minds. We wanted to start now!

I had to go back in for a CD3 ultrasound the next day and took 100mg Clomid CD5-CD9. As a result, I got one big follicle - 24mm! I was a little sad that I only got one, but had to remind myself that that's what the average woman gets every month without medication, and that I shouldn't be greedy.

Our insemination happened on May 30 with 2.2 million little guys, post-wash. I never really thought much about what it would feel like, but now I can say without a doubt, it hurt! I could feel the catheter hit the top of my uterus and I'm not ashamed to say I cried through the whole thing (partly because of the pain, partly because of all the emotions I was feeling). But I wouldn't undo a second of it.

One thing I have to tell you about your dad - he's the best husband a girl could ask for. Following the procedure, while I was lying on my back with my hips raised (such a flattering position), I mentioned that I'd forgotten to get a clown video. He asked what I meant and I told him I'd read some obscure Italian study that posed an increased IUI success rate when the patient watched a video of a clown immediately after. So, what do you think your dad did? Yep. He went straight to YouTube on his phone and found the first clown video he could find. :)

So here I am, nearly two weeks later, waiting for my period to start any minute. Tomorrow's the day I'm supposed to test if I haven't gotten it and I'm just trying to keep my expectations low so I don't have as many pieces to pick up. I keep having imaginary conversations with myself about why I don't think I'm pregnant. No matter what scientific reason I come up with, the one that ultimately makes the most sense to me is that it simply can't happen this way. Not for me. I'm meant to travel a much harder road; at least that's what I've been envisioning the past few months. Maybe it's a defense mechanism, maybe not.

So, there's the reason I haven't written. I've had quite a bit to say, but didn't want to get my hopes up any higher than they are naturally. I guess you'll be hearing from me soon, based on the events of the next couple of days.

Take care and I love you, whenever you are.